The Ann Savoy Trio hail from Eunice, Louisiana, the heart of Cajun country and home to the legendary Savoy Music Center.

If there were a Cajun music Royal Family, Ann Savoy would be the Queen. Since the 1970s,
Ann, along with her accordion-building husband Marc, has been on the front line of the effort to
document, preserve and promote Louisiana’s Cajun culture. With her husband and fiddler
Michael Doucet, Ann has performed Cajun music around the world and with her all-female
Cajun band, the Magnolia Sisters, she has received two GRAMMY nominations. Cajun music
enthusiasts and historians around the globe have praised her book Cajun Music, A Reflection of a
People as the veritable bible of this primarily French culture situated in the southwest corner of
the state of Louisiana and she has appeared in countless Cajun music documentaries and several
major motion pictures (The Divine Secrets of the Ya-Ya Sisterhood and All the King’s Men). She
has produced records and liner notes for major labels and she has worked with some of the
biggest names in American folk music including Linda Ronstadt, with whom she recorded the
GRAMMY-nominated duet album, Adieu False Heart. Today she continues to perform with the
Savoy-Doucet Cajun Band, the Magnolia Sisters, and with her husband and her two sons in the
Savoy Family Band.

Joining Ann in the trio is her eldest son Joel, who in 2006 founded Valcour Records which has
become the number one source for new music coming out of Acadiana (the French-speaking part
of Louisiana where Cajun music comes from). A highly regarded musician, record producer and
recording engineer, Joel is a GRAMMY winner for his production work with The Band
Courtbouillon and a nine-time GRAMMY nominee, as well as a two-time winner of the coveted
CFMA Fiddler of the Year Award. He has worked and played with all of Louisiana’s finest
Cajun musicians as well as folks like John Fogerty, Steve Earle, and T-Bone Burnett and he has
performed Cajun music in over 15 foreign countries in the last 20 years.

Completing the trio is Joel’s wife, the “Jolie Blonde” Kelli Jones-Savoy. Originally from a
musical family in North Carolina, Kelli has spent the last 12 years in Lafayette, Louisiana,
studying Cajun fiddle music and vocal styles. As a member of Feufollet, she has become a
primary figure in the progressive Cajun music scene in Acadiana, writing songs in both French
and English and performing them on fiddle and guitar. Kelli also heads up her own traditional
Cajun trio with accordionist Drew Simon of the Pine Leaf Boys and Megan Brown and she has
performed and recorded with many of the top bands in Acadiana, including Steve Riley and the
Mamou Playboys and Cedric Watson and Bijou Creole. 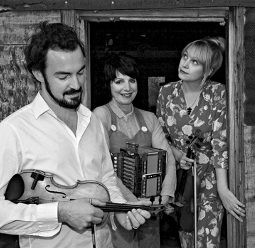 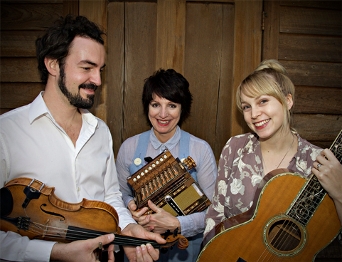