Hop onto The Baghdaddies’ magic carpet for an amazing musical trip from Newcastle, England through Eastern Europe as a gateway to the rest of the world!  The Baghdaddies have been astounding audiences across Europe for over 20 years, on stages far and wide, big and small, on the streets, in village halls.  The music appeals to everyone with a pulse with their eclectic fusion of Balkan Roma wedding and brass band music played at breakneck speed.  Throw into the mix a little punk, jazz, reggae and ska and you have one of the most danceable bands on this or any other planet.

‘If Jerry Dammers and Terry Hall had grown up listening to world music, The specials might have sounded very like the Baghdaddies.’ Nigel Williamson [Uncut]

‘The band have a particular flair for the Balkans and capture its frenetic energy and flamboyance wonderfully. There is also a fair share of klezmer, jazz, ska and punk – an anarchic fusion where Ivo Papasov meets The Clash meets The Beat’   Songlines

‘With their impossibly infectious mix of Balkan dance beats, jazz, ska, tango, punk, reggae, each member of the quintet (trumpet, sax, guitar, bass, and drums) is absurdly accomplished – and they all sing too, sometimes all at once. The Baghdaddies gave 101 per cent in a show that managed to be both super-tight yet spontaneous fun.’   Cambria Arts

‘The New Year began at the Southbank with a circus-themed lock-in.

Bellowhead are artists in residence here, and celebrated with a slick six-hour party that made use of every inch of the building except for the main concert hall. Upstairs areas were transformed into disco or folk clubs, while the ballroom was decorated like a circus, with trapeze artists and two stages, on which Bellowhead alternated with the Newcastle group the Baghdaddies.

Each band played three varied sets replete with good musicianship, energy and humour. The lesser-known Baghdaddies more than held their own. Despite their name, the five-piece are influenced more by eastern Europe than the Middle East, but can’t be accused of leaping on to the Balkan bandwagon as they have been together for 14 years. Their rousing brass work was carefully fused with ska, jazz and Indian influences, and made the case that they deserve a far bigger following’.  Robin Denselow  ****

Touring the world for some 15 years, the Baghdaddies’ music is world music with strong Balkan tendencies alongside Caribbean grooves, Middle Eastern rhythms and even some Geordie [native Newcastle] touches, all awash with influences such as ska, jazz, punk and metal, delivered with theatre and exuberance. Uplifting and infectiously danceable, full of blistering brass, rousing 5 part vocal harmonies and a rhythm section that compels you to dance. Songs to listen to and party!

‘The band have a particular flair for the Balkans and capture its frenetic energy and flamboyance wonderfully. There is also a fair share of klezmer, jazz, ska and punk – an anarchic fusion where Ivo Papasov meets The Clash meets The Beat’  Songlines Magazine

“The vibe of Toots & The Maytals with the passion of Eastern Europe creating the funkiest sound ever; the tent was popping, they were our true festival heroes.” Glastonbury Review

For almost fifteen years this English band surprises their home country and far beyond with their energetic mixture of styles. On a wide range of instruments from brass, drums, electric guitars to saz, bouzouki and vocals this band knows how to create a party. Their Balkan brass orientated music goes from rock to ska, Arabic, dark jazz rock and psychedelic sounds. Each song is a surprise with unexpected twists, good music and just some unbelievable energetic rocking. I love Sufi’s Beard which is a fantastic peace of progressive world rock. In A Slow March to China these musician show that not only they know how to rock, they are also capable of playing a beautiful melody and are fantastic musicians. The Baghdaddies recorded a great album which makes me hope they keep on playing for another fifteen years at least.  Eelco Schilder  FolkWorld Issue 43 11/2010

“Finely honed festival veterans. A Baghdaddies gig is something you don’t forget. Blending eastern European gypsy songs with klezmer and pinned down grooves. This band have true international appeal.”
freeradicalsounds.com

“One of the most danceable bands on this or any other planet”
The Trades Club, Hebden Bridge.

“With their impossibly infectious mix of Balkan dance beats, jazz, ska, tango, punk, reggae, each member of the quintet (trumpet/melodica, sax, guitar, bass, & drums) is absurdly accomplished – and they all sing too, sometimes all at once. From ‘Ounce Pounce’ to ‘Abdul Waheb’, ‘Slivovits’ to ‘Tipsy Cocek’, plus plenty from their third CD ‘Random Acts of Kindness’, there was simply no let-up – the Baghdaddies gave 101 per cent in a show that managed to be both super-tight yet spontaneous fun. As another reviewer has remarked, ‘this band from the souk-infested, mint tea-drinking side of Newcastle … even had the audience clapping along in seven-eight time’, and it’s a testament to their funky skills that they make such complex rhythms irresistibly accessible to one and all.
All good things must end, and with their trademark encore ‘Havatequila’, which segues into ‘Show Me The Way To Go Home (Have A Banana)’, the Baghdaddies were gone, leaving us exhausted but happy … and cured of all ills. Think we might need a repeat dose of their medicine in a year or so, though.”
Celf CAMBRIA Arts Review. 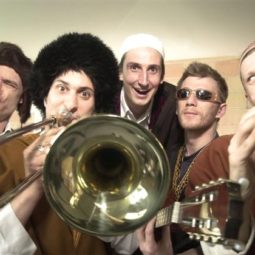 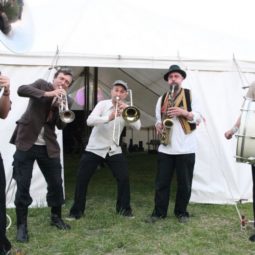 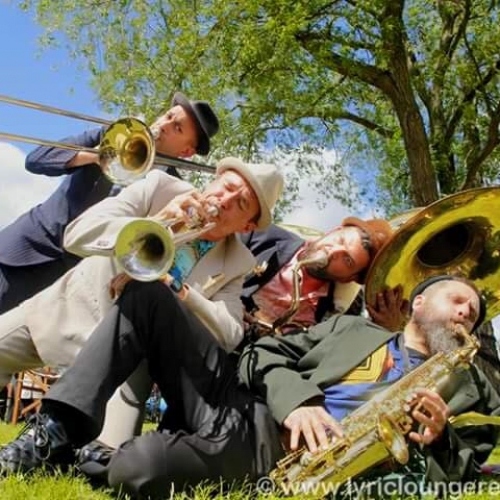