‘I’m sure I hadn’t heard a better audience response the whole weekend. And deservedly so, as this was a joyful, life affirming, exhilarating set.’   Americana UK Jonathan Aird

In June 2017 Bayou Seco were the delighted recipients of the highest artistic honour in New Mexico, the Governor’s Award for Excellence in the Arts, celebrating their lifetime of achievement and contribution to the arts of the region.  An award that we think is wholeheartedly deserved.  Read more about this prestigious honour HERE.

Ken Keppeler and Jeanie McLerie, otherwise known as ‘Bayou Seco’, are lovers. That’s not an attempt to describe the way they feel about each other, although after a close relationship of thirty years standing it may be very apt, but rather the nature of their bond with the people’s music of Louisiana, New Mexico, Arizona and the entire southwest of the United States, from the Mississippi River to the coast of California.

On first sight, the pair look like they might have stepped straight of the set of the Coen Brothers’ ‘Oh Brother Where Art Thou?’ but those prairie threads, that venerable facial rug, are no prop department pretence. They’re outward symbols of a life lived in the service of roots Americana in its many guises. Their shows are a journey through time, an odyssey into the outback of the deep South West, with its shifting populations of Native American, French, Mexican, Polish, German, Irish migrant adventurers, each with their own particular flavour to add to the rich musical sauce.

Inspired by listening to The Carter Family on the radio in her native New Jersey, Jeanie spent her early adult life in Europe, busking, archiving, researching and performing traditional music. In the 1960s, she hung out with Bert Lloyd, The Watersons and Peggy and Ewan McColl during the salad days of the UK’s bourgeoning folk club scene. “It was a neat time to be there,” she remembers. “It was so alive.”

Ken grew up in California surround by Mexicans and other south westerners. His early love of traditional Hispanic music, country and blues survived a tour of duty in Vietnam, and solidified into an early mastery of the violin and the banjo. “I was never into the likes of Joan Baez,” Ken admits, “because I was so close to other traditions, living where I did. There’s a feeling about traditional musicians that comes from human experience. I’m very attached to that.”

It was when Ken went to Louisiana in 1973 and met the great Dennis McGee, the Balfa Brothers, Marc Savoy and D L Menard that he began to focus on Cajun and Zydeco. Folk was derided in Louisiana at that time, but that didn’t deter Ken. His fascination transcended the tawdry two-step of fashion, and it still does. Ken followed his nose and his passions, hitchhiking all over the USA, soaking up the forgotten music of marginal people.

Jeanie and Ken met down at the Savoy Family’s music store in Louisiana in the mid 1970s. They started performing and busking together, especially in and around the Cajun music mecca of Eunice. Eventually Jeanie’s respiratory illness forced her to leave and so she and Ken moved to New Mexico, with their belongings in a truck and their mattress on the roof, like a pair of John Steinbeck soul adventurers.

Jeanie and Ken ended up in Albuquerque, and started to learn Spanish colonial songs and fiddle music from singer Antonia Apodaca and the violinist Cleofes Ortiz amongst others. It was music on the verge of extinction and Ken and Jeanie were determined to keep it alive.  Later they also turned the heat of their indefatigable curiosity on the fiddle music of Arizona’s Native American Tohono O’odham people…’The People of the Desert’.

Eventually they formed a band, christened by grafting the name of Bonnie Apodaca’s hometown, Arroyo Seco, with the swamp pools or ‘bayous’ of their beloved Louisiana.  That’s how ‘Bayou Seco’ was born.

Since then Jeanie and Ken have been singing, playing, researching and archiving the music they love, sticking to a simple unadorned line-up of diatonic accordions, fiddles, guitar, mandolin, banjo, harmonica and voices, spreading their knowledge of the rough-hewn musical expression of a continent in front of audiences all over the world, on concert stages, in schools, bars, folk clubs, community and old people’s centres.

Jeanie and Ken took their music from forgotten people and they’ve spent most of their professional lives giving it back, with added verve, warmth and style.

Ken Keppeler and Jeanie McLerie, aka Bayou Seco, have spent a lifetime soaking up the traditional music of Louisiana, New Mexico and Arizona. Using a simple line up of fiddle, accordion, banjo and guitar they take their audience on a musical odyssey through the American southwest, performing and reinvigorating long forgotten songs and dances with wit, warmth and style. Their love-affair with the folk traditions of the southwest has already lasted thirty years, and it’s still going strong.

Ken Keppeler and Jeanie McLerie, aka Bayou Seco, have spent a lifetime soaking up the traditional music of Louisiana, New Mexico and Arizona. Using a simple line up of fiddle, accordion, banjo and guitar they take their audience on a musical odyssey through the American southwest, performing and reinvigorating long forgotten songs and dances with wit, warmth and style. Their love-affair with the folk traditions of the southwest has already lasted thirty years, and it’s still going strong.

‘There are few artists who bring such an understanding of and passion for the music they perform as this utterly admirable duo.’  Vic Smith fROOTS Aug/Sept 2011

‘Whoever coined the term roots music must have had the uncanny Bayou Seco in mind.’  Dan Willging Dirty Linen

‘I’m sure I hadn’t heard a better audience response the whole weekend. And deservedly so, as this was a joyful, life affirming, exhilarating set.’  Jonathan Aird American Uk

‘That’s what Bayou Seco do ….. learn wonderful but neglected music from old timers, have extraordinary fun playing it, and inspire others to pass it on.’

‘Pappa’s on the roof and he won’t come down!’
So, Ken, Jeanie and Tomás, their 22 year old punk musician godson, spoke to me and everyone, old and young, big and small, in Garway Village Hall as they took us on a journey through the flesh-eating swamps of Louisiana, hill-billy country in the Appalachians and the hot, sweaty world of New Mexico. Bayou Seco’s trick is to cock a Cajun fiddle-banjo-guitar-harmonica snook to the darker side of life, whether it’s domestic angst or lost love or being chased by a bear and eaten in the forest. And when the bear is Ken with his long, grey beard tucked up behind his glasses, then you have to laugh as you dance with him and his crazy Appalachian feet. Young Tomás held us in his handsome gaze as voice and fiddle cast their seductively un-punk spell and Jeanie held all together what could have spilled around a bit (like Momma in the kitchen), as I suspect she does in ‘most everything. The three Silver City folk swung us in the palms of their harmonious hands and took us with them to a hotter, sweeter, wilder and more restorative world. If anything could get me off that roof and put a sparkle in my eye, they could!

Bayou Seco at Cowboy Up

Keep on the Sunnyside of Life

Papa's On The Housetop 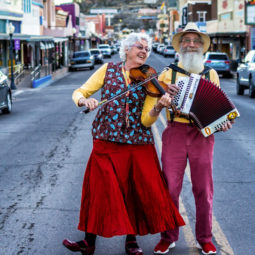 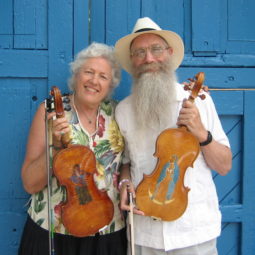 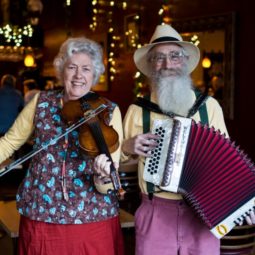 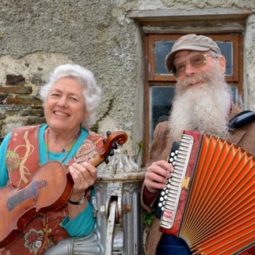 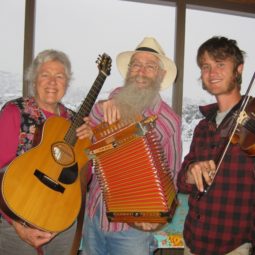 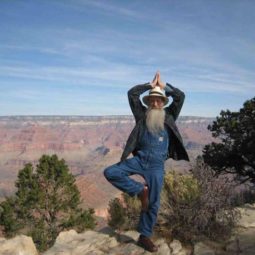 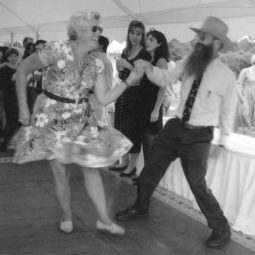 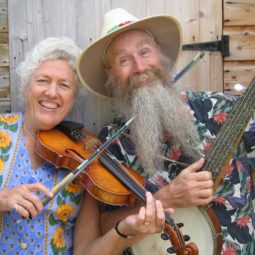 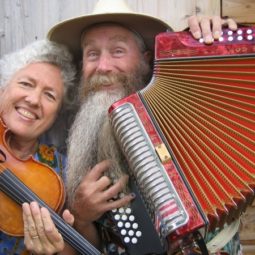 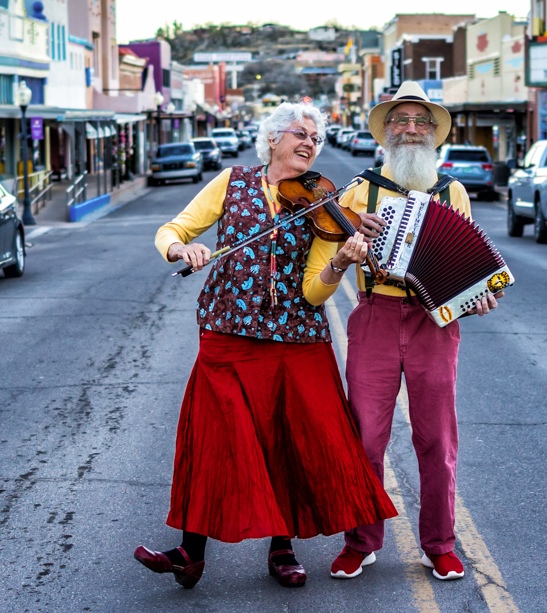