At the Festival of the Desert in 2004, somewhere near Timbuktu, two groups of musicians took to the stage.  Never before had Wodaabe and Touareg musicians performed together and the ecstatic reaction from the crowd convinced them to take this impromptu jam session a stage further.  Both sets of musicians came from nomadic backgrounds, their people sharing the grasslands of the Sahel, though not always harmoniously.  They also faced the same imminent threats to their nomadic way of life from climate change bringing draught then poverty which for many has led to migration to the cities.

Etran Finatawa’s music creates a soundscape of the grasslands of the Sahel and the arid desert perfectly uniting their two cultures.  Never before have the clear, piercing vocals of the Wodaabe been heard in a contemporary context, infused with swirling Touareg guitars and hypnotic, driving, calabash rhythms.  Their traditional dress on stage is a colourful and deliberate reminder that this is an alliance not a fusion of cultures.

The new band’s very first release earned them a BBC World Music Award for best newcomers in 2007 and was followed by the highly acclaimed album ‘Desert Crossroads’.  Eight years on from that first impromptu performance Etran Finatawa have performed on every continent and become the most celebrated band in Niger.  They have been cultural ambassadors abroad and cultural activists at home.  Etran Finatawa were key participants in the highly successful The Endless Journey multi-media project that toured the UK in 2012.  Lead guitarist Alhousseini Anivolla released his debut solo album ‘Anewal/The Walking Man’ to much acclaim this summer and also appeared at The BT River of Music’s Africa Stage in July.

A fourth album, due for release in Spring 2013 on World Music Network, sees the band come full circle to celebrate their homecoming.

This tour co-incides with the album release and will have full promotional support.

‘driving, gloriously repetitive, traditional music mixed with some of the slickest and most beautiful electric guitar imaginable… they combine to present a sublime sound’ Sydney Morning Herald, 4****stars

‘When I closed my eyes, I was transported back to the Sahara, where the rhythms of the camels and the expansive sky are beyond words, but not beyond music.’ Lloyd Gedye Mail & Guardian, South Africa

In addition to their concerts Etran Finatawa offer an educational package for schools.

In these workshops the Wodaabe members will demonstrate their traditional Wodaabe chants and accompany their vocal music with the traditional calabasse (gourd) drums and a slow motion type of movement verging on dance and handclapping. They will also display their traditional long embroidered tunics, leather hose, turbans with ostrich feathers and the face paint of yellow spots and stripes used to enhance their features. The Tuareg members have always used a variety of stringed instruments, tende drums and vocal ululations to animate their songs and dances but since the 1970’s have used a guitar in a style called Ichumar – it will be explained that this style came out of their rebellion and exile in Libya.

They will sing in two different languages, Tuareg Tamashek and Wodaabe Fulfulde, which will convey tales of nomadic life, of isolation and liberty, of extreme hardship and poverty, of a harsh climate, of life giving animals and handsome beasts, of festivities and families, of stars and desert storms. Some of their songs are healing songs as the music is a therapy in both cultures.

Their music will create a sound picture of the grasslands of the Sahel and the arid desert and explain the nomadic lifestyle, where they move with their camels, long-horned cattle, sheep, goats and donkeys seeking pastures along the Sahelian savannah at the fringes of the South Sahara. They will also allude to the effects which climate change is having on the environment in their region, threatening their traditional  ways of life and forcing them to adapt to find more sustainable methods.

They will be accompanied by their manager of 8 years and interpreter Sanda van Edig, who speaks fluent French, German and English; all members of the group speak French and through Sandra will field questions and answers.

To see them in action in Niger click onwww.jeanmolitor.de/foto/afrika-niger then scroll down to the Vimeo of Etran Finatawa.

‘The Touareg and the Wodaabe nomadic tribes aren’t known for their tolerance of each other, their history being marked by competition and conflict. So something of an entente cordiale was achieved when, at the Festival In The Desert in 2004, a Touareg outfit and a Wodaabe group took their places alongside each other onstage. The audience reaction was such that both bands instantly threw in their lot to create a desert supergroup – Etran Finatawa (or Stars Of The Tradition). Three albums in, their sound clearly distinguishes them from other desert bluemen. The Touareg members might brandish Fender Stratocasters with all the rebel cool of their compatriots Tinariwen but, thanks to the Wodaabe input, the Etran Finatawa sound is more percussive and acoustic than that of their hugely celebrated peers.’ 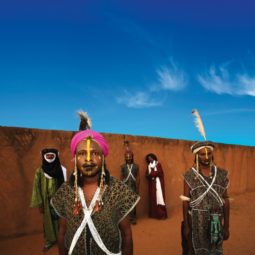 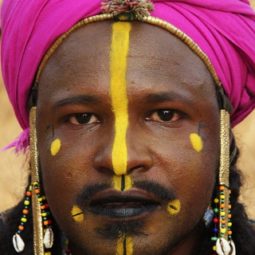 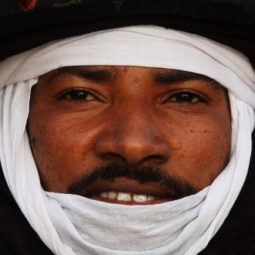 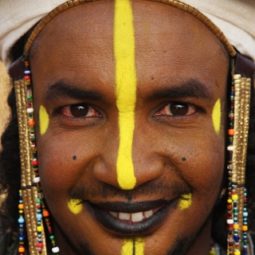 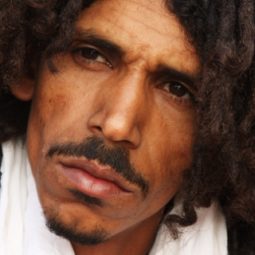 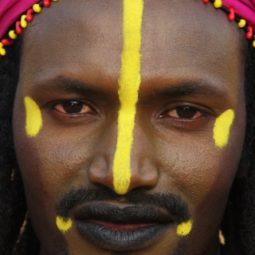 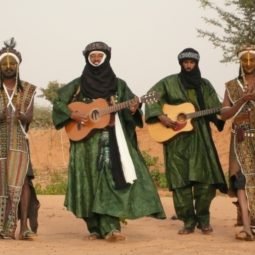 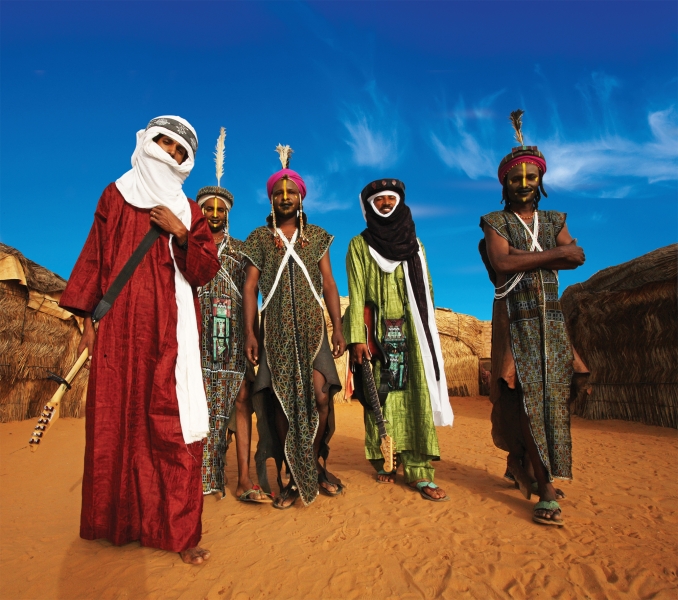