“Many are called, but few are chosen.  On their recording ‘Devil in the Seat’, Foghorn Stringband proves once again that they are still the Chosen Ones when it comes to down-home, footstomping, ass-kickin’ old time music.”
Stuart Mason, FiddleFreak

The Foghorn Stringband is the present day shining gold standard for American Stringband music.  With eight albums, thousands of shows and over a decade of touring under their belts, it’s no surprise they have two entirely new generations of old-time musicians following their lead. Through all of this, they’ve never let the music grow cold; instead they’ve been steadily proving that American Roots music is a never-ending well of inspiration.

Today Foghorn Stringband features the intertwining harmonies of founding members, Stephen “Sammy” Lind, Caleb Klauder along with powerhouse vocalists, Reeb Willms and Nadine Landry, all of whom bring a wealth of songs, instruments and traditions making them festival favourites from coast to coast and around the globe. On Stage they gather around one microphone, balancing their music on the fly, and playing with an intense, fiery abandon.

To Foghorn, this music is as relevant today as it was a century ago.  They see themselves not as revivalists, but as curators and ardent fans, and their music is a celebration of these roots.  From their origins in Portland Oregon’s vibrant underground roots music scene in the late 90s and early 00s, Foghorn have spread the old-time string band gospel all over the world.  Along the way they’ve brought in influences and inspirations from many travels and late-night jam sessions. Old-time square dance tunes now rub shoulders with Cajun waltzes, vintage honky-tonk songs and pre bluegrass picking.  This is the kind of bubbling musical brew which first intoxicated the American mainstream back in the day. Foghorn Stringband can often be found after a performance in a local pub or club continuing to play with equal energy and joy late into the night. They’re obsessed, and that obsession rings true with every note they play and every song they sing. You’ll see. There’s Foghorn…and there’s everybody else.

The music of The Foghorn Stringband today revolves around four master musicians; Portland, Oregon-based Caleb Klauder (vocals, mandolin, fiddle), Reeb Willms (vocals, guitar), Quebec-based Nadine Landry (vocals, upright bass) and Stephen ‘Sammy’ Lind (vocals, fiddle, banjo).  Each member of the band comes not only from a different part of the American roots music spectrum, but leads the pack in their field as well.  Caleb Klauder’s wistful, keening vocals and rapid-fire mandolin picking are as influenced by Southern roots music as much as by his upbringing in Washington State. Also from Washington, Reeb Willms grew up in the state’s Eastern farmlands singing hard-bitten honky-tonk with her family.  Nadine Landry’s roots lie in the rural backgrouds of Acadian Quebec, but she cut her teeth as one of the best bluegrass bassists in Western Canada. Mnnesotan Sammy Lind, simply put, is one of the best old-time fiddlers of his generation and has a voice that sounds like it’s coming straight from an old 78!

“Face it people – there’s Foghorn…and then there’s everybody else.” -Stuart Mason – The Fiddlefreak.

“All they have to do is play, and the power surges straight through your own chest. They let their own musicality and the tunes speak for themselves.” “There’s an honesty to this music….It’s pure and simple, ingredients that often go missing in this day and age. It just makes you want to get up and dance.” “If the band has one goal, it’s to get gritty, but in Foghorn’s case, “gritty” does not mean rough or scratchy or untogether. It means with a huge wave of old-time noise bearing down.” “Foghorn Stringband makes the music their own with instrumental virtuosity and intense dedication to the sources.” -Old Time Herald

“Portland’s Foghorn String Band stands at the top of today’s vibrant old-time music revival and a fine example of what an unending revival it is. Each album finds them deeper into the tradition, more familiar with the rich resources of roots music, and more focused, but still propelled by that undercurrent of punk energy.” —Art Menius, WMMT

“…the quartet is among the finest practitioners of American old-time music on the globe, a string band whose faithful renditions of songs from bygone decades are no less than living, breathing history. That’s not to say they play museum pieces; Foghorn’s remarkable achievement is in making these careworn tunes sound vital, present, and fully relevant. In a town that’s riddled with whimsical throwbacks to old-timey fetishes, Foghorn Stringband remain absolutely authentic and without discernible gimmick. -Ned Lannamann, The Portland Mercury.

“This band has an established sound that rides the cusp of old time and bluegrass and manages to glean the best of both in the process. Caleb Klauder and Sammy Lind have kept it consistent. With the addition of Nadine Landry on bass and Reeb Willms on guitar, they have expanded the sound by adding a depth with their excellent musicianship and superb singing. The fiddle tunes rock out the way they always have with this band with fine readings of “Lost Gal” and “Chicken Reel” from Clyde Davenport, along with “Stillhouse,” “Old Molly Hare,” and “Paddy on the Turnpike.” Of course the whole band sings with gusto. The best, though, is the duet by Landry and Willms where they do a magnificent reading of “Mining Camp Blues” that catches the spirit and feel of wonderful duets done by the late Hazel Dickens and the reigning queen of old time singing, Alice Gerrard, a half-century ago. This top-notch program of ballads, songs, and tunes is varied and rich, a bit raucous and rowdy, while still touching a wide range of emotions. This one is a keeper.” – Bob Buckingham, Fiddler Magazine

“This American foursome cocks some mighty keen ears in the direction of American old-time music, and this latest collection sees them in the finest of form, with their songbooks, harmonies and fiddle lines criss-crossing state lines with capricious abandon. Intriguingly, all are northwest coasters, (now resident in Oregon and the Yukon), and draw their influences as much from Acadian and Canadian bluegrass sources as they do from the deeper south. Caleb Klauder’s old-time fiddle lines are crisp as a starched shirt, and Sammy Lind’s banjo leverages the rhythmic potential of their set list with a subtlety that binds the instruments beautifully. Vocalists, Reeb Willms and Nadine Landry (also on guitar and upright bass) bring a naked freshness to What Will We Do, a song borrowed from Dervish’s Cathy Jordan, and much more besides. Wide-angle, blue sky, foot-stomping music, bereft of artifice.” – Siobhan Long, Irish Times

“Quite frankly, it’s amazing that a band as good as the Foghorn String Band still seem to be an under the radar outfit despite pounding the boards for over a decade and this being their seventh album. They are, of course, a string band, and up there with the best you will ever hear. Consisting of two couples, they deliver beautiful harmonies and playing that ranges from the (very) fast and furious to the more subtle and delicate. The material is largely a mix of the familiar and traditional-ish (“John Hardy”, “Pretty Polly”) but there are some less well-known pieces like Garry Harrison’s “Jailbreak”. The influences of British folk music is clear to see, with an acknowledgement to the Silly Sisters and Cathy Jordan (Dervish) for “What Will We Do?” and a take on “Henry Lee” aka Child Ballad 47 “Young Hunting”. All are played and sung superbly and the album can probably be best summed up by saying that it drives the listener to CD baby to stock up on back catalogue while having simultaneously having “Devil…” on repeat. – Jeremy Searle, AmericanaUK

“The effervescent energy that pours through ‘Devil In The Seat’ from The Foghorn Stringband draws its energy from the deep roots of tradition yet remains unafraid to present the product of those roots through ever-spreading branches of influence and brilliance. This is old-time American string band music that comes through as fresh as tomorrow’s sunrise and with equal sparkle. The Foghorn Stringband take inspiration from yesterday and hurls it reeling into tomorrow, and with a musical pedigree a mile long, delivers an album that offers all you would expect and more besides. The Foghorn Stringband are Caleb Klauder (mandolin, fiddle, vocals) Stephen ‘Sammy’ Lind (fiddle, banjo, vocals) Reeb Willms (guitar, vocals) and Nadine Landry upright bass, vocals) and that combination serves up a vintage that it’s an utter pleasure to consume. From classic tunes such as the rattling insistence of ‘Stillhouse’, through the lonesome echo of ‘Mining Camp Blues’ and sorrowful melancholy of ‘Henry Lee’, to the ripping pace of ‘Old Molly Hare’ and ‘John Hardy’, this is essential listening for lovers of ‘straight-from-the-heart’ unadorned music. The essence of ‘Devil In The Seat’ proves the old ways still remain strong, solid and ready to stand up and be counted. The Foghorn Stringband prove they are rightly recognised as guardians of a tradition that remains constant as the North Star. Go out and get a copy of this album and treat yourself to a dose of heritage shouldered on oceans of integrity.” – Tom Franks, Folk Words 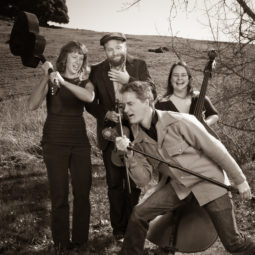 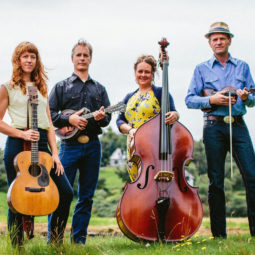 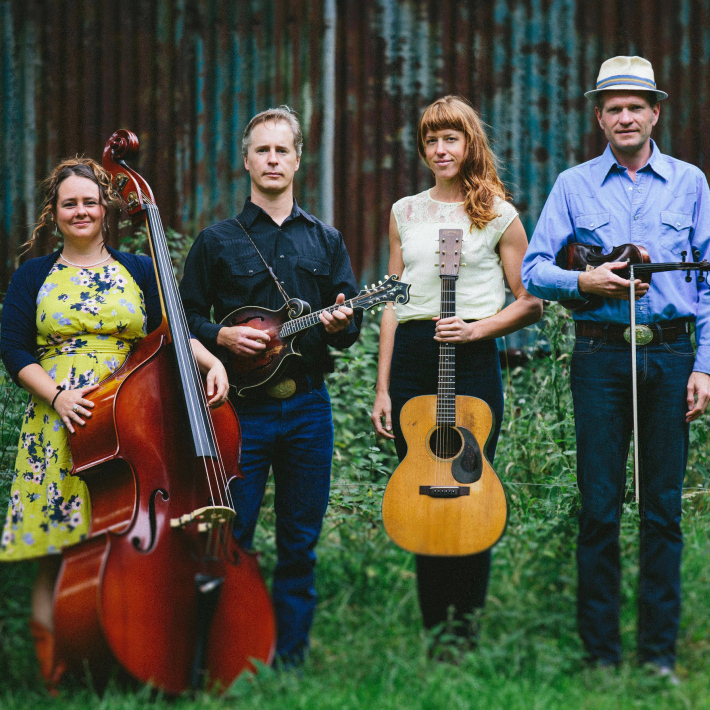