Nubia was an ancient African kingdom in the Nile valley, situated between present-day southern Egypt & northern Sudan. Sometimes referred to as Kush or Aithiopia, it is thought to have been one of the earliest settled societies in the region, occupying an important trade route through North Africa, sub-Saharan Africa and the Mediterranean.

NubaNour are a Cairo-based collective of Nubian singers and master frame drummers, performing traditional music and dance from antiquity alongside contemporary songs reflecting the ongoing struggles of life in exile after the loss of their Aswan homelands in the 1960s during the construction of the High Dam.

The Aswan High Dam became a symbol of Egyptian nationalistic pride following the 1952 Revolution, promising to usher a new era of prosperity through industrialisation. Financed by the USSR and hailed, at the time, as a triumph of water management and the might of hydroelectricity, the project resulted in the creation of Lake Nasser, one of the world’s largest man-made reservoirs. Perhaps not since the time of the Pharaohs had Egypt’s aspirations been expressed though such an epic feat of engineering.

It was the people of Nubia however who were to pay a high price for the benefits the Dam bought to the wider Egyptian population, and some fifty years after their ancestral lands were drowned under the waters of Lake Nasser the environmental and social impacts of the High Dam are still felt amongst those who were disposed.

While some Nubians were moved by the Government to new settlements in Aswan, to a place known somewhat dispraisingly as the Valley of Hell, the majority of Egyptian Nubians sought refuge elsewhere across the country, including Cairo where the first incarnation of the NubaNour group was created by the late El Said Gamal in 1962.

NubaNour’s repertoire comprises both the sacred and secular. The band’s hybrid Sufi chants feature verses equally praising Christian and Islamic saints, reflecting the influence and dominance of different religions and spiritual practices in Nubia throughout history.  Nubian singers pride themselves on having song for very social occasion, from birthing rituals through to tender laments to mark the passing of a loved one’s soul to the afterlife. Typically, theses old tribal customs are performed by call and response vocals, with hand claps and accompanied by the Tar Frame Drum, thought to possess a mystical ability to evoke the sound of fire, water and air – it’s traditional circular construction from palm bark and goat skin said to creating an unending union between the Nubian people and their environment.

Dance also plays a central role in the band’s performances with a unique dance called Frry representing the movement of Balti fish swimming through the waves of the Nile. Agricultural and work songs serve to remind the Nubians of their farming origins while later day poetic songs are meditations about the loss and longing endured by the Nubian people, serving both as a melancholic reminder of their submerged villages in Aswan and as an expression of hope for the growing movement calling for a return to a new home in their ancestral lands.

NubaNour are a Cairo-based collective of Nubian singers and master frame drummers, performing traditional music, sacred & secular rites and contemporary songs reflecting the ongoing struggles of life in exile after the loss of their Aswan homelands in the 1960s during the construction of the High Dam.

Their stage show features call and response vocals accompanied by the Oud and Tar Frame Drum, thought to possess a mystical ability to evoke the sound of fire, water and air – it’s traditional circular construction from palm bark and goat skin said to creating an unending union between the Nubian people and their environment. Dance also plays a central role in the band’s performances with a unique Nubian dance called Frry representing the movement of Balti fish swimming through the waves of the Nile.

The first incarnation of the NubaNoor (Nubian Lights) group was established in 1962 in Cairo by Mr El Said Gamal. The ensemble was notable for featuring the finest Nubian singers and composers of the age including  Abdullah Batt, Abou Mirghani, Saleh Abbas.

Alomandokor is an ancient Nubian legend about the Nile. It tells how people drowned beneath the currents of the world’s greatest river never die and how their souls continue to live deep in the River bed. Nubian people felt a great affinity with nature, living their lives in accordance with the seasons and continual ebb and flow of the Nile – the earliest Nubian songs were inspired by their framing origins.

Nubian hand drums, known as Duff (fashioned from goat skins and wood) were thought to be a key link between their people and their environment, with the ability to produce the sounds of Fire, Water and Air through complex rhythms. In addition to songs for cultivation and harvesting the Nubian people sang epic poetry of Love and religion, recognising both Islam and Christianity.

Nubians regarded themselves as singers with songs for every occasion from birthing songs with accompanying rituals in which a new born baby would have it’s face bathed in the Nile with food thrown into the river as an offering to the souls of spirits in the Nile, through to tender songs known as Azaa, performed to mark the death of loved ones.  Dance also played a central role in their culture with a dance called  Frry representing the movement of Balti fish swimming through the waves.

The Nubian way of life remained relatively constant until the modern world began to encroach on the Nubian people’s environment through the first stages of the construction of the Aswan dawn in 1902. Traditional lands and sacred areas were flooded during 1912 and 1933 leading to the displacement of the Nubians who began to migrate to other areas in Egypt, with an especially large concentration of Nubian people taking residence in Cairo. The Nubian homelands were lost forever in 1964 during the controversial construction of the Aswan High Dam during the Nasr period. While some migrants made new settlements elsewhere in Aswan, known somewhat unfortunately as the “Valley of Hell’,  the majority of the Nubian people sought refuge across Egypt in this final migration.

Generations later the band can still be found performing traditional Nubian music deep in the Cairo metropolis. Their repertoire may have expanded to include songs of the deep sorrows felt by the Nubians from the loss of their traditional lands and nostalgia for their way of life, however alongside this meditation on events of the 20th century, Nubian Lights continue to perform poetic love and praise songs with their unique rhythms and cultural heritage. 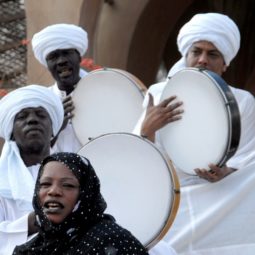 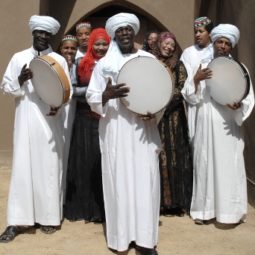 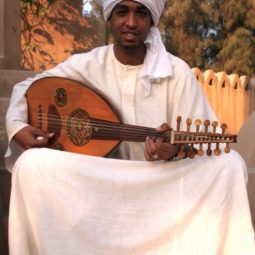 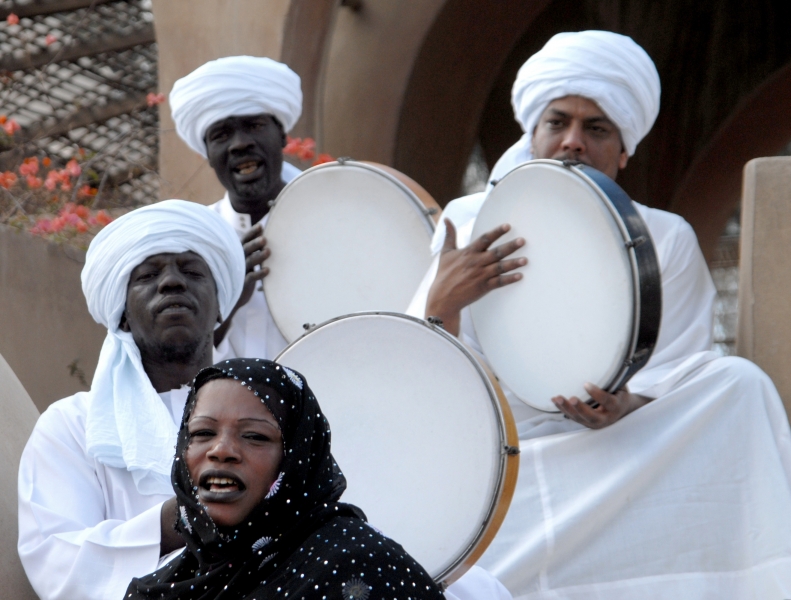