New to our roster, this supergroup of Cajuns, each one highly respected leaders of their own groups.

Three of the most prominent and entertaining personalities (not to mention incredibly talented accordionists) come together in this good-time group of Louisiana’s finest musicians. The Band Courtbouillon is much more than just a few larger than life Cajun musicians sitting down to play the music they love, the music they were brought up on and the music audiences love too.

More details to follow but meanwhile check out this review of their new album, out on Valcour and lsten to some tracks on http://valcourrecords.com/releases/wayne-toups-steve-riley-and-wilson-savoy-the-band-courtbouillon.

There’s never been a recording quite like this one. Three highly accomplished Cajun revivalists—each representing a successive generation, each a musical pioneer, and each a highly respected bandleader in his own right—spontaneously coming together in an informal setting to pay their mutual respects to a musical heritage that has now become their shared inheritance. They infuse their interpretations with an enthusiasm and urgency rarely heard even in the originals, and the result is a thoroughly Cajun embarrassment of riches.

Wayne Toups, the eldest of the three and the project’s instigator, inhabits center stage. His vocals have grown husky and gruff while remaining vividly plaintive, acquiring the sense of authenticity and authority attributed to the late Johnny Cash. Assuming a supportive role here, Steve Riley, the next eldest, performs primarily on guitar and as harmony vocalist, but also contributes the only original tune, a brief musical introduction, and three solo tracks on which he not only takes the lead vocal, but also plays accordion, fiddle, and guitar. Wilson Savoy of the Pine Leaf Boys holds up his end with harmony vocals, silvery sharp fiddle solos, and a pair of lead vocals, all of which are infused with deep respect for ensemble collaboration as well as the strategic deployment of signature Cajun embellishments.

While the song selection here displays a predilection for the dark side of Cajun songwriting (the Louisiana equivalent of Appalachian murder and disaster ballads), the overriding mood throughout is emotionally stirring and soulful, occasionally approximating R&B or contemporary roots rock. Two secret weapons help bring this fruitful collaboration to a state of near-perfection: the ubiquitous presence of acoustic bass up front in the mix, and the intimate setting of Joel Savoy’s homemade, analog-only studio, which reflects the warmth at the heart of The Band Courtbouillon and the humanity at the heart of Cajun music.

Click HERE to read the 5 star review in Songlines magazine of the new album. One of Songlines’ Top of The World CDs of 2012.

Click HERE for a Flickr gallery of images and a review from their live show at the Dewey Balfa Cajun and Creole Heritage Week. 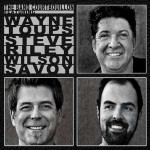