The Perch Creek Family Jugband are a dynamic band consisting of five energetic multi-instrumentalists and vocalists, four of whom happen to be siblings. The band performs original songs with a high energy, harmony driven sound drawing from folk, roots and gospel.

Originally from Perch Creek in the North Coast area of NSW, the band has recently exploded onto the Melbourne scene, earning themselves a reputation as purveyors of quality music and entertaining antics among audiences of Australia’s music capital.

With humble beginnings as a street jug band led by their eccentric father, Bob Hodgkins, The Perch Creek Family Jugband has been performing and evolving over the best part of 10 years. Bob has since hung up his jug band hat and handed the reins over to the rest of the band who have harnessed the passion originally instilled by their old man, while taking the music far beyond the well-trodden territory of traditional jug band music.

The Perch Creek Family Jugband are a staple on the Australian festival circuit, with their career taking them from dusty street corners to The Sydney Opera House, as well as two successful tours of Europe and the UK.

The band’s second studio album featuring the single Big Things Calling is set to be released in early 2014 alongside an international tour.

The Perch Creek Family Jugband have anthropologists baffled. Why did they turn out the way they are? Was it because they all drank and bathed in the muddy waters of Perch Creek from birth? Was it because they were forced to sing for each meal, or simply because their old man was nothing short of a lunatic? Either way, circumstances conspired to create a band of siblings with an incredibly unique and diverse sound that seems to find its way through the cracks between a vast array of genres.

Like the creek itself, the band are at times raging and relentless and at others placid and haunting. Featuring five lead vocalists whose voices combine in sublime harmonies over instrumentation as diverse as the trombone, frailing banjo, washboard, double bass, overdriven blues harp, musical saw, tap dancing and a whole lot of other stuff including, of course, the jug. I guess there was something in the water…

The Perch Creek Family Jugband command attention and lift spirits wherever they go, from dusty outback roadhouses to the Sydney Opera House, and have become a staple at music festivals across Australia. Two successful whirlwind tours of Europe, where they were a hit in Germany, Switzerland, France, England, Ireland and in Scotland at the Edinburgh Fringe Festival, have set them up a summer 2014 return to coincide with their new album, featuring their acclaimed single “Big Things Calling”.

The Perch Creek Family Jugband are:

Camilla Hodgkins:
Riviera keyboard, ($5 from the local dump) frailing 5 string banjo, “steam-powered piano” (melodica), vocals and everything else that the local dump shop has to offer.

Eileen Hodgkins:
Guitar, clarinet, ukulele, tap dancing and vocals. (No jokes may be made at Eileen’s expense, as stipulated in her contract)

“Crispy Hot Chickens” (Christi Hodgkins):
Ever the bargainer, young Crispy held on to his soul, and sold his leg to the Devil in exchange for phenomenal talent and musical sensitivity that defies his meagre 16 years of life experience. He plays the harmonica, kazoo, trombone, saw and sings.

“Bigfoot” Jimmy Chandler:
The tall man with the fabulous moustache. Not only does he have a fantastic moustache, but Jimmy also plucks the bass fiddle, sings and writes ultra-cheesy band bios.

Dressing up and shakin' down 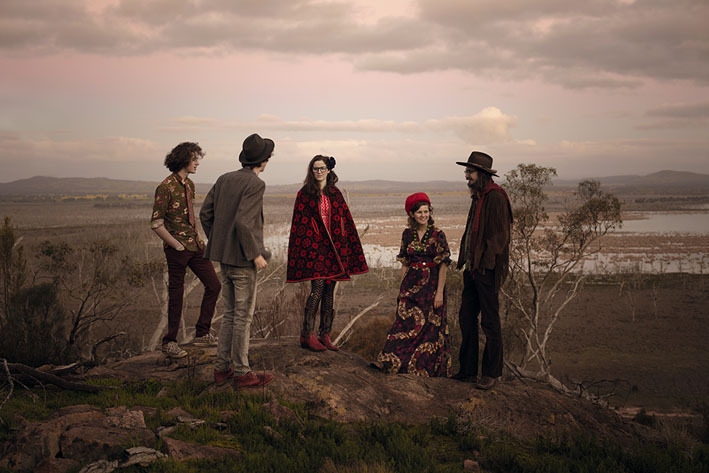