2023 marks the 50th anniversary of the Tibetan Monks of the Tashi Lhunpo Monastery and to celebrate this major landmark they embark on their “Power of Compassion” tour of the UK and Europe from May to August. We are honoured to team up with Jane Rasch of the Tashi Lhunpo Monastery UK Trust and 30ips Ltd, in furthering the aims of the charity and welcome all booking enquiries.

For more info go to

Founded by the First Dalai Lama in 1447, Tashi Lhunpo is one of the four great monasteries of the Gelugpa (or Yellow Hat) tradition, and is renowned for its scholarship in Mahayana Buddhist Philosophy and the Tantric tradition of Tibetan Buddhism.

The Chinese occupation of Tibet in 1959 and the Cultural Revolution from 1966-80 wreaked destruction on the great monastic institutions, including Tashi Lhunpo, which lost many of the precious scriptures, statues and images. Of the 6,000 monks in the monastery, only 250 were able to follow the Dalai Lama into exile, and in 1972, under the patronage of the present Dalai Lama, Tashi Lhunpo Monastery was re-established in the Southern Indian state of Karnataka.

Occupying a central position in the Tibetan settlement of Bylakuppe, the monastery is now home to 300 monks, and has once again regained its reputation as an important centre for learning and for the preservation of the culture and traditions of Tibetan Buddhism.

Time of the Skeleton Lords is the fourth album from the monks of Tashi Lhunpo Monastery and their second 30IPS release following 2008’s Dawn Till Dusk, which was lauded by the Rough Guide to World Music as “Exhilarating multi-layered rhythmic recitation of chants: a shimmering monument of polyphonic sonority.” The new album was recorded on location in India, and features sacred Tibetan prayers and ritual music marking the great cycle of life, death and rebirth – the journey of the consciousness through the Bardo, according to Tibetan Buddhist traditions.

Eight Tibetan monks present an exciting performance of sacred masked dance from their New Year festival, interspersed with the mesmerising chant and music of the Buddhist monastic tradition.  The dramatic dances, taken from the Gutor Festival before Tibetan Losar (New Year), use colourful costumes and masks.  With instruments from the ancient tantric tradition – long horns, bells, cymbals and skull drums – as well as the atmospheric calm of traditional chanting and prayers, the monks evoke the unique atmosphere of their monastery. With introductions to the performance, this show can be enjoyed by all, while providing an insight into the endangered culture of Tibetan Buddhism.

The monks have performed in theatres, arts centres and village halls all over the UK and Europe, and have been in residence at a number of festivals including Glastonbury, WOMAD, Cheltenham, Musicport and Larmer Tree amongst others (and even a guest appearance in Loxfest from The Archers alongside the Pet Shop Boys in 2014), where they have been a very popular addition to the programme.  They have recorded a number of CDs, and have had their music broadcast on radio and television on many occasions.

“A psychedelic whirl of chanting, dancing, drums and cymbals”

“A magical universe of reincarnation and release”

THE POWER OF COMPASSION – SACRED MUSIC AND DANCE

MICROPHONES – See Stageplan
If possible, show will be performed acoustically. The monks prefer to have a clear stage, so ideally prefer ambient/omnidirectional microphones suspended above the stage. Otherwise if necessary five microphones front of stage with adjustable stands. These will need to be moved between items on the programme, which can be done by an assistant in the group. One microphone centre stage rear. Static/stand microphone for announcements between each item, either stage left or right or off-stage.

LIGHTING
General stage lighting, preferably from three directions, should be in a warm amber colour for the chanting. White light is preferred for the dance. For ‘Durdak’ a red wash if possible.
If necessary a spot is useful for the announcer at the start of each item.

The performance consists of dance items and chants. Some of the chanting is performed from a seated position, which may cause sight-line problems in a venue such as a church with fixed pews. In this case, if space permits, a raised platform for the seated chants, with room for five people to sit cross-legged, with about 1ft 6in (.5 meters) in front of them for instruments, space in front used for the dance. This is not necessary for raised stages or venues with raked seating.

Music stand or lectern for announcer.

BACK STAGE
Four long tables within easy reach of the performance area to lay out the costumes and instruments. Changes between each piece in the programme.

FRONT OF HOUSE
Three tables for merchandising. Merchandise (handicrafts from the monastery and Tibetan refugees in India, CDs etc) will be managed and sold by the company. 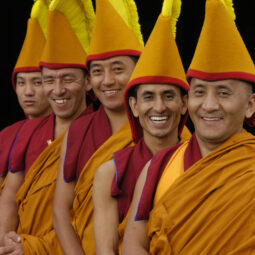 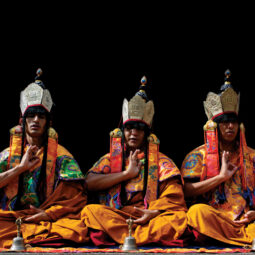 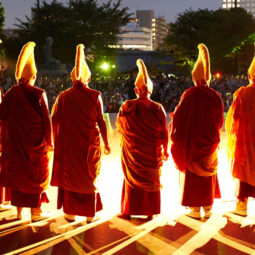 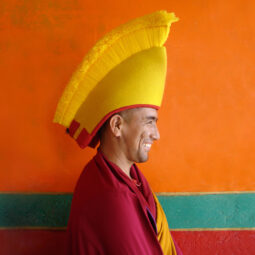 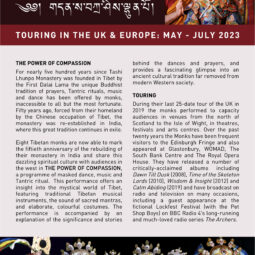 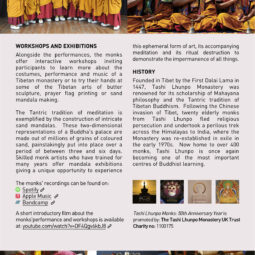