It is with great saddness that we have to announce the death of our friend Bagui Bouga, founding member of Etran Finatawa.  He died from an asthma attack in Switzerland last Friday, 2nd August and this tragic news has come as a great shock to his family and friends.  We feel truely fortunate to have known and worked with him.  His friends in Etran Finatawa and manager Sandra van Edig pay tribute to him below.

‘Bagui was a philosopher, a nomad. He knew so well his culture and he enjoyed sharing his knowledge of his cultural heritage with many people.
We will miss him for his music, for his art, his inspiration, intellectual exchange. His capacities, his compassion, his sensitivity were unique.
He left us too early. Hopefully “gaynako”, our herdsman will find where he wanders  plenty of rain and nice and green pastureland with plenty of cows and peace for his soul!’ 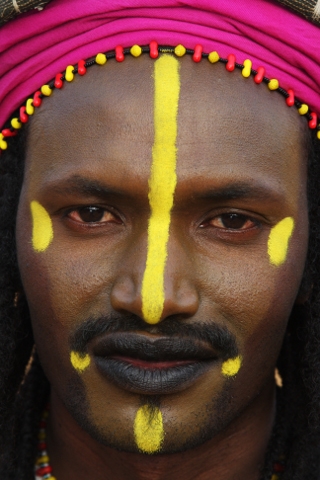