Bayou Seco return to the UK after two wild weeks of music in Ireland and kick off their UK tour in Garway. Here’s a review from one unsuspecting audience member.

‘Pappa’s on the roof and he won’t come down!’
So, Ken, Jeanie and Tomás, their 22 year old punk musician godson, spoke to me and everyone, old and young, big and small, in Garway Village Hall as they took us on a journey through the flesh-eating swamps of Louisiana, hill-billy country in the Appalachians and the hot, sweaty world of New Mexico. Bayou Seco’s trick is to cock a Cajun fiddle-banjo-guitar-harmonica snook to the darker side of life, whether it’s domestic angst or lost love or being chased by a bear and eaten in the forest. And when the bear is Ken with his long, grey beard tucked up behind his glasses, then you have to laugh as you dance with him and his crazy Appalachian feet. Young Tomás held us in his handsome gaze as voice and fiddle cast their seductively un-punk spell and Jeanie held all together what could have spilled around a bit (like Momma in the kitchen), as I suspect she does in ‘most everything. The three Silver City folk swung us in the palms of their harmonious hands and took us with them to a hotter, sweeter, wilder and more restorative world. If anything could get me off that roof and put a sparkle in my eye, they could! 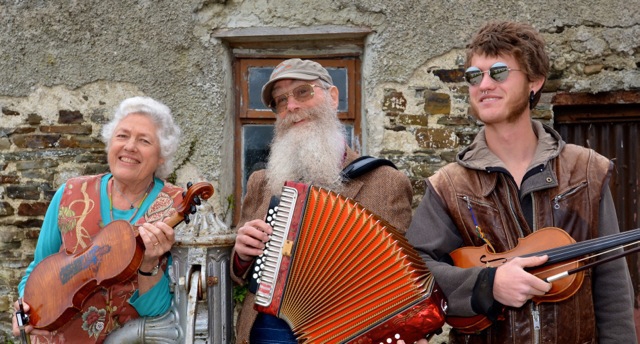