On 21 November 2011 the Egyptian singer Ramy Essam received the Freemuse Award 2011 at a ceremony in Södra Teatern in Stockholm, Sweden.

The Freemuse Award Committee stated: “Ramy Essam played an important role during the Egyptian revolution and suffered severe beatings and torture as a consequence. He personifies the powerful role that music played in the Arab Spring.”

Two days earlier Ramy had been in South Africa for the Freedom to Create awards where he was honoured with a ‘runner-up’ prize of 10,000 US dollars at a vibrant awards ceremony and concert at the Kirstenbosch Gardens in Cape Town. 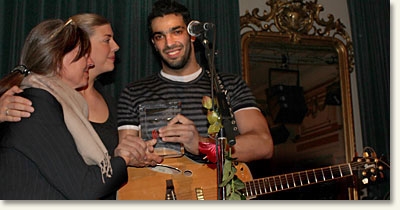